Faced with an enemy that even Odin and Asgard cannot withstand, Thor must embark on his most perilous and personal journey yet, one that will reunite him with Jane Foster and force him to sacrifice everything to save us all.

I went to Thor The Dark World with high anticipation as it was hammering the US box office and I really enjoyed Thor 1 on DVD and wished I 'd gone to the cinema to see it. Well it was certainly entertaining and had a bit of panto about it although I could help being irritated at all the obvious weakness from the director , more on that later.

It started well with the evil super villain Malekith played by Christopher Eccleston wanting to destroy, well everything in sight. Switch to London and Natalie Portman, playing Jane the drippy heroine, sorry romantic interest happens to absorb the 'power source' that has unleashed Malekith , Did I mention this was a bit panto!
Enter Thor rescue taking  Jane back to Asgard. Malekith follows and I will skip forward to Thor and Loki joining forces to save Asagard (don't want to spoil)
These two are the best about the films, love their chemistry and all the best lines go to them.
I am a BIG fan of Tom Hiddleston and breathed a Big sigh of relief at one point.... my lips are sealed.

The action is great especially in Asgard but London scenes are silly and irritating. the climatic scene at the end is a mess and far too jumpy and fragmented. Totally losing the viewer attention and fails to build up momentum. The biggest clanger for me was the costumes of Malekith's army who look like they had raided an old DR Who episode from the 1970's. Think cheap looking white masks and black leotards. As they chased Jane around London they really looked like they couldn't be bothered. They weren't chasing they were trotting....although not as silly as Stellan Staarsgard walking around in his knickers for a cheap laugh or the faux English people.
BUT all these are small things as on the whole thoroughly enjoyed this totally escapist movie.

Don't forget to stay for the now, must do , scene after the credits role. 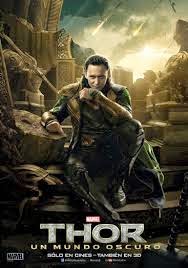