Books I have treasured and believe are still current today. Some of the book images are from my own collection as I thought it would be nice to see the covers from back then!! You can probably tell which those are. If your looking for a present you can't go wrong with introducing a child to these and also adults who are young at heart. 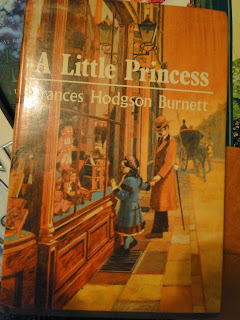 Synopsis
Motherless Sara Crewe was sent home from India to school at Miss Minchin's. Her father was immensely rich and she became ‘show pupil’ - a little princess. Then her father dies and his wealth disappears, and Sara has to learn to cope with her changed circumstances. Her strong character enables her to fight successfully against her new-found poverty and the scorn of her fellows.

Verdict
One of my favourite books of all time. I loved Sara and it didn't matter whether she was rich or poor she still had a strong character, new right from wrong and could transport herself away with her imagination. She could see the good in any situation. A magical Story. 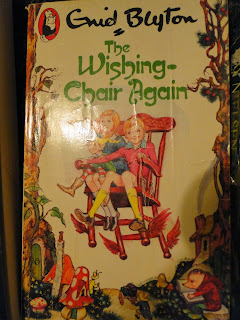 Synopsis
When Joe, Beth and Frannie move to a new home, an Enchanted Wood is on their doorstep. And when they discover the Faraway Tree, it proves to be the beginning of many magical adventures! Join them and their friends Moonface, Saucepan Man and Silky the fairy as they discover which new land is at the top of the Faraway Tree. Will it be the Land of Spells, the Land of Treats, or the Land of Do-As-You-Please? Come on an amazing adventure – there’ll be adventures waiting whatever happens.
Enid Blyton’s funny, magical adventure stories have become true classics, loved by millions and still selling thousands of copies every year. She is arguably the most famous children’s author of all time, thanks to series such as The Wishing-Chair, The Faraway Tree­, The Mysteries, The Famous Five and The Secret Seven.
Verdict
There are 6 books in this series that transported me as a child to a magical land full of amazing and memorable character. I still have a soft spot for Silky!


Little House on The Prairie by Laura Ingalls Wilder 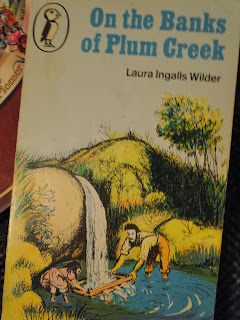 Synopsis
Set during the pioneer days of the late 1800s and early 1900s, Laura Ingalls Wilder's books chronicle her life growing up on the Western frontier.

Verdict
A beautiful series that introduced me to living out in the wilds of Canada. The hardships and the life lessons while growing up surrounded by and living off nature. I still have a yearning to collect syrup from maple trees like they did in the books. 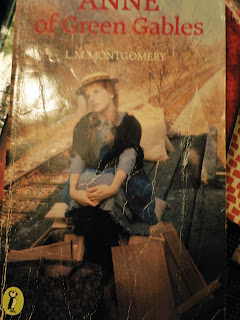 Synopsis
When the Cuthberts send to an orphanage for a boy to help them at Green Gables, their farm in Canada, they are astonished when a talkative little girl steps off the train. Anne, red-headed, pugnacious and incurably romantic, causes chaos at Green Gables and in the village, but her wit and good nature delight the fictional community of Prince Edward Island, Canada, and ensure that Anne of Green Gables continues to be a firm favourite with readers worldwide.

Anne of Avonlea continues Anne's story. Now half-past sixteen but as strong-headed and romantic as ever, Anne becomes a teacher at her old school and dreams of its improvement. But her responsible position and mature ambitions do not prevent her entanglement in the scrapes that still seem to beset her in spite of her best intentions.

Thoroughly charming and amusing, with a supporting cast of colourful and endearing characters, both books will enchant and entertain readers, guaranteeing that Anne's adventures capture their affections as well as their imaginations.

Verdict
I loved Anne's feisty adventerous character, her relationship with her adopted parents and her growing romance with Gilbert. A real treasure and something we can all  relate to. 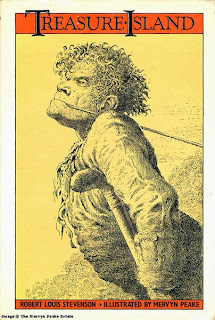 Synopsis
‘Fifteen men on the dead man's chest-Yo-ho-ho and a bottle of rum!’ Treasure Island is a tale of pirates and villains, maps, treasure and shipwreck, and is perhaps the best adventure story ever written.
When young Jim Hawkins finds a packet in Captain Flint's sea chest, he could not know that the map inside it would lead him to unimaginable treasure. Shipping as cabin boy on the Hispaniola, he sails with Squire Trelawney, Captain Smollett, Dr Livesey, the sinister Long John Silver and a frightening crew to Treasure Island. There, mutiny, murder and mayhem lead to a thrilling climax.

I remember my mum reading this to me when I was about 6 or 7 and I was totally enthralled by Jim's adventures with the pirates and especially Long John Silver. I remember loving his parrot! The illustrations by Mervyn Peake were amazing and perfect for the story.

Song of The Lioness Series By Tamora Pierce

Synopsis
Becoming a legend is not easy, as young Alanna of Trebond discovers when she disguises herself as a boy and begins training to be a knight. Alanna's skills and stubborness help her befriend Prince Jonathan and alienate his evil uncle, Duke Roger. Filled with swords and sorcery, adventure and intrigue, good and evil, this book is a rousing introduction to the intensely satisfying story of Alanna.
Verdict
The series that got me into reading fantasy fiction. I LOVE this series. Alanna is a very strong role model for little girls everywhere. She never lets anything get in her way, is brave, strong and bright. There is adventure and romance all against the backdrop of a little girl growing up and all of those issues she has to deal with while pretending to be a boy. It is an outrage this book is no longer published in the UK but you can still get second hand copies so please do!


The Hobbit and Lord of the Rings by Tolkein 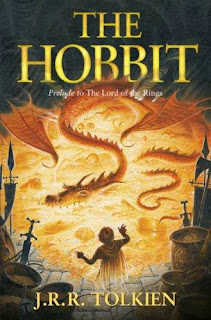 Immerse yourself in Middle-earth with Tolkien’s classic masterpieces behind the films, telling the complete story of Bilbo Baggins and the Hobbits’ epic encounters with Gandalf, Gollum, dragons and monsters, in the quest to destroy the One Ring.
When they were first published, The Hobbit and The Lord of the Rings became instant classics. Treasured by readers young and old, these works of sweeping fantasy, steeped in unrivalled magic and other worldliness have sold more than 150 million copies around the world.
This new boxed gift set, published to celebrate the release of the first of Peter Jackson’s three-part film adaptation of JRR Tolkien’s The Hobbit, THE HOBBIT: AN UNEXPECTED JOURNEY, contains both titles and features cover images from both films.
It offers readers a new opportunity to discover Tolkien’s remarkable world of Middle-earth and to follow the complete story of Bilbo Baggins and the Hobbits’ part in the epic quest for the Ring – beginning with Bilbo’s fateful visit from Gandalf and culminating in the dramatic climax between Frodo and Gollum atop Mount Doom.
Show More
Show Less

Verdict
What can i say, A true Classic. Tolkein builds an amazing world and characters that take your breath away. A true genius.


East of the Sun, West of the Moon by Peter Christen Asbjornsen and Jorgen Moe 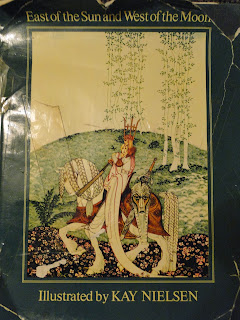 Synopsis
The 33 Scandinavian folk tales take the imagination of the reader from rags to riches, from skulduggery to heroism, via witches' curses, beautiful princesses, giants, quests, billy goats and the occasional wicked troll, to a happy ending.
Verdict.
I was given this book when I was about 7 I think and was immediately transported into Scandinavian folk tales by the beautiful illustrations by Kay Nielsen. I had never heard these tales before and have been a firm fan ever since. You can see my somewhat dogeared copy!

If you do like this
check out two particular authors who have written their own version of the tales and they are both are equally as good and also have a different take so you will see it from different angles. I have read all and have really enjoyed them individually.

East of the Sun, West of the Moon by illustrator and writer Jackie Morris. Beautifully illustrated by Jackie as always
North Child by Edith Pattou
All the above books make really great gifts for 10+ and a great idea if you want to pick something a little more unusual. 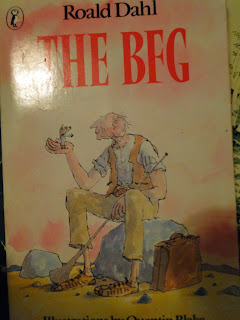 Synopsis
The well-loved story of a big friendly giant who spirits a child out of bed to the land of the child-eating giants. Illustrations by Quentin Blake
Verdict
One of my favourite Roald Dahl along with Matilda, I loved the idea of the BFG. Dahl is an inspiration and will never go out of fashion.
see also
Matilda and Witches and everything else by Roald Dahl.
Also if they have got through Roald Dahl check out David Walliams, surprising good and along the same lines.
﻿ 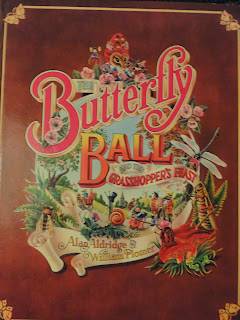 Synopsis
Renowned illustrator Alan Aldridge introduced the fantastical world of the Butterfly Ball in this breathtaking modern classic. It is now available in a lavish new edition, complete with nature notes by Richard Fitter on each creature and an introduction to the life and work of Alan Aldridge.
Verdict
This originally came out in the 7o's and has been re released. Not surprising it is a gorgeous book and gift for any child. I loved pouring over the illustrations and seeing all the different things I had missed and I never tired of looking. I am particularly fond of this as I got to play Aranea the spider in our school play when I was 10. I was a real femme fatale!! You'll understand when you read the poem...﻿

Eva recently died in her 90's after a long and successful career as an author. She only came back to prominence after Harry Potter came out and people wanted similar books. However she has written for all ages and my particular favourite is The Dog and His Boy and all her teen romance novels set against WW2 like The Secret Countess. She won many awards especially for Journey to River Sea. If you are not familiar please take a look you won't be disappointed.
Posted by Drawing On Books at Thursday, December 19, 2013