Book Review The Queen of Tearling by Erica Johansen 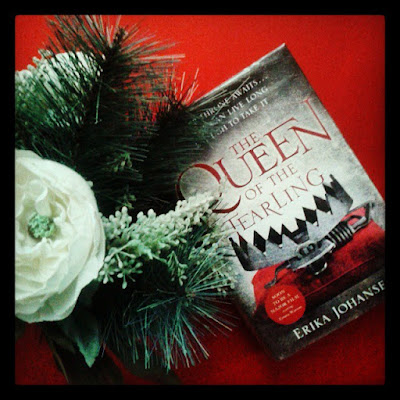 Synopsis
Her throne awaits . . . if she can live long enough to take it.
It was on her nineteenth birthday that the soldiers came for Kelsea Glynn. They’d come to escort her back to the place of her birth – and to ensure she survives long enough to be able to take possession of what is rightfully hers.
But like many nineteen-year-olds, Kelsea is unruly, has high principles and believes she knows better than her elders. Unlike many nineteen-year-olds, she is about to inherit a kingdom that is on its knees – corrupt, debauched and dangerous.
Kelsea will either become the most fearsome ruler the kingdom has ever known . . . or be dead within the week.
Combining thrilling adventure and action, dark magic, mystery and romance, The Queen of the Tearling is the debut of a born storyteller blessed with a startling imagination.

"I couldn’t put the bloody thing down. It would be fair to say I became obsessed with the role and the book" (EMMA WATSON)

The story starts by setting the scene as if from an old classic fairy story. Kelsea has been looked after by an old couple isolated in a wood with only her books as company. On her nineteenth birthday a group of soldiers come to take her to her kingdom and her birthright. Kelsea has been told nothing of her parents or her heritage only that she is the rightful Queen. Totally unprepared with only the strength of her convictions to guide her they travel to the city and on this journey we get to know more about the harsh world she is born to rule , her enemy the Red Queen and the men sworn to protect her. On the way she has to prove to them she is worthy of their loyalty and visa  versa.

This book is like an onion peeling off the layers to reveal more trouble, more about her past and about her magical gifts that are a surprise to her and to everyone else.

By the time she arrives in the capitol to depose her vain and selfish uncle she realizes the terrible legacy she has inherited and vows to stop the cruel price their enemy, The Red Queen demands from them.

One of my favorite characters is Mal, her formidable knight who becomes her loyal servant and a linchpin for the book. I loved the relationship, camaraderie and loyalty between the knights and how each carry their own scars making them even more endearing and attractive to the reader. There is also added spice and mystery of Fetch the King of thieves on which Kelsea definitely has a crush. This, you feel , is a relationship that will hopefully develop in the next books as it is only touched on here. Is her admiration returned? What is his real identity?

There are so many twists and turns in this book it positively leaves you breathless. The end also leaves us on massive cliffhanger with Kelsea's country on the brink of invasion. Can she fend of The Red Queen? Who is her father and why is it such a big secret? Why does she have magical powers?

So many frustrating questions, it really keeps you hooked. Both plot and characters are very strong as is the world building. Although you could say this was dystopian I would personally put it into the fantasy realm. Its nods to the legends of King Arthur with his round table and Robin Hood and his Merry Men and the plot certainly keeps you guessing  and on the edge of your seat. There are strong themes of loyalty, friendship and the pitfalls of power laced with adventure, magic and a touch of romance to wet the appetite.

The Magicialns Guild by Trudi Canavan
The Graceling by Kristin Cashore
The Poison Study by Maria V. Snyder