Book Review: The Light We Cannot See by Anthony Doerr 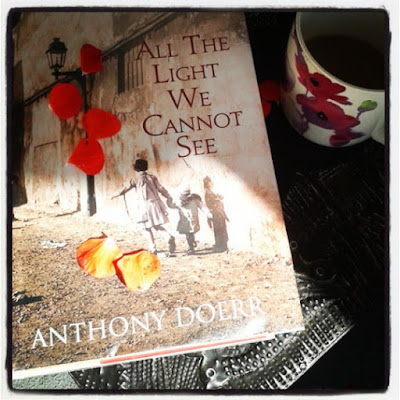 WINNER OF THE 2015 PULITZER PRIZE FOR FICTION AND
WINNER OF THE CARNEGIE MEDAL FOR FICTION
A beautiful, stunningly ambitious novel about a blind French girl and a German boy whose paths collide in occupied France as both try to survive the devastation of World War II
When Marie Laure goes blind, aged six, her father builds her a model of their Paris neighborhood, so she can memorize it with her fingers and then navigate the real streets. But when the Germans occupy Paris, father and daughter flee to Saint-Malo on the Brittany coast, where Marie-Laure’s agoraphobic great uncle lives in a tall, narrow house by the sea wall.
In another world in Germany, an orphan boy, Werner, is enchanted by a crude radio. He becomes a master at building and fixing radios, a talent ultimately makes him a highly specialized tracker of the Resistance. Werner travels through the heart of Hitler Youth to the far-flung outskirts of Russia, and finally into Saint-Malo, where his path converges with Marie-Laure.
Deftly interweaving the lives of Marie-Laure and Werner, Doerr illuminates the ways, against all odds, people try to be good to one another. Ten years in the writing, ALL THE LIGHT WE CANNOT SEE is his most ambitious and dazzling work.


I think, no I know this is one of my favorite books of 2015. Epic and enchanting. Its a big book with short chapters that fly from one character to another, one time to another like a bee collecting honey. It almost defies description so I won't try as there is a perfectly adequate synopsis above. There is however nothing inadequate about this wondrous novel.It is exquisitely written and builds a vivid world beyond the book. It is a supremely talented writer to harness a story of such epic proportions in such eloquent and accessible style. Such is Doerr's skill at bringing all the threads of the story together you barely realise your are constantly jumping through time and into others lives every couple of pages. It seems very natural and fluid. He draws you into to his web if intrigue, friendship and survival.

There is a support cast of colourful and lovable characters that will live on in the memory as they fight the horrors of war. The end zips to 1970's and finally 2014 and it is filled with great poignancy and a reminder the horror of the war and a time of technical innocence was not that long ago. The connection the brings all the strands together is the development of the radio which even back then could bring random strangers together over the airwaves. Such encounters can be so meaningful and powerful it an last a lifetime. Now we have such a plethora of connectivity with the internet it seems meaningless. Doerr reminds us to appreciate fine craftsmanship, or the beauty of a shell,  a wild bird, the person across the street that makes your heart beat a little faster. The book is a subtle reminder that technology is a marvelous invention that can connect us but should not distract us from the life before us and around us.

I cried at the end simply because I had to close the book.

Unparalleled
Posted by Drawing On Books at Friday, August 14, 2015