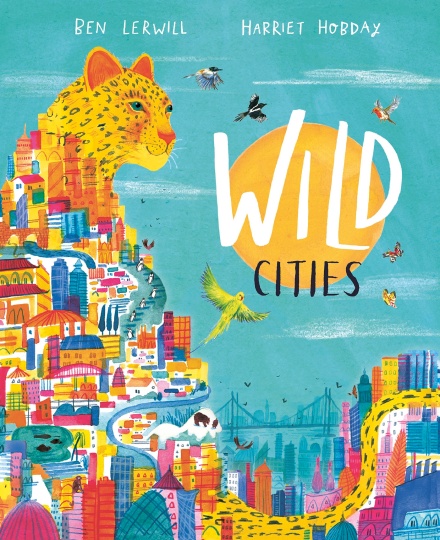 An absorbing and extraordinary insight into the different types of wildlife living in cities across the world.

It is teaming with fascinating facts and intriguing anecdotes that will tempt little explorers and nature lovers to discover and see what animals live in their own cities.

Every city has a wild side waiting to be discovered that is perfectly illustrated by the sumptuous and detailed illustrations that burst from every page. Harriet cleverly brings each of the different cities characters to life making each location a visual delight.

Did you know London was home to exotic parakeets or that Berlin is the greenest city in Europe home to wild boars and racoons?

This is also a timely reminder that animals are struggling to retain their homes.

Mumbai has lost 60% of its green space forcing all sorts of animals and reptiles such as snakes to venture into the city. But is also highlights how adaptable and tough animals and insects are in the example of the 18000 bees who survived the Notre Dame Cathedral fire.

It is a reminder we share our space with many other inhabitants even if we don't always see them. It will ignite curiosity in children and encourage them to look around and keep an eye out for the animals living quietly alongside them.

A lovely gift to share with little nature lovers and explorers.

Picture a city. What do you see? Traffic and tower blocks? Or maybe you imagine something a little . . . wilder?

These are the astonishing stories of the animals who are adapting to live in our urban world - and how you can help them to thrive.

From the pitter-patter of penguins in Cape Town, to the prowl of a leopard in Mumbai, the splash of a seal in Sydney, cities are home to all sorts of unexpected residents.

Keep your eyes wide open as as we travel the globe discovering wild cities. With magical illustration and beautiful storytelling, these incredible stories will fascinate every reader who has the travel bug, or is an animal fan, or has ever wondered what else exists in our big cities.

Ben Lerwill is a multiple award-winning writer. His work has appeared in a host of publications including National Geographic Traveller, Time Out, The Sunday Times, The Daily Telegraph and The Guardian. Over the past decade he's won four British Guild of Travel Writers' Awards, and often focuses on wildlife, rail journeys and the outdoors. Best of all, he writes fascinating, magical non-fiction stories that will amaze and inspire - just like the ones in this book.

Harriet Hobday is an extraordinary new talent, a recent graduate of the MA Children's Book Illustration at Cambridge School of Art. Currently based in Edinburgh, she was highly commended in the Macmillan Prize 2015 and runner-up for The Batsford Prize 2018.