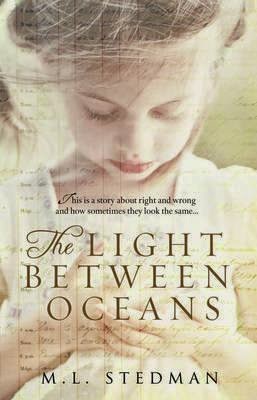 After four harrowing years on the Western Front, Tom Sherbourne returns to Australia and takes a job as the lighthouse keeper on Janus Rock, nearly half a day’s journey from the coast. To this isolated island, where the supply boat comes once a season and shore leaves are granted every other year at best, Tom brings a young, bold, and loving wife, Isabel. Years later, after two miscarriages and one stillbirth, the grieving Isabel hears a baby’s cries on the wind. A boat has washed up onshore carrying a dead man and a living baby.
Tom, whose records as a lighthouse keeper are meticulous and whose moral principles have withstood a horrific war, wants to report the man and infant immediately. But Isabel has taken the tiny baby to her breast. Against Tom’s judgment, they claim her as their own and name her Lucy. When she is two, Tom and Isabel return to the mainland and are reminded that there are other people in the world. Their choice has devastated one of them.
M. L. Stedman’s mesmerizing, beautifully written novel seduces us into accommodating Isabel’s decision to keep this “gift from God.” And we are swept into a story about extraordinarily compelling characters seeking to find their North Star in a world where there is no right answer, where justice for one person is another’s tragic loss.
The Light Between Oceans is exquisite and unforgettable, a deeply moving novel

The first thing that caught my attention about this book was how visual and atmospheric it was. Stedman really draws you into the age at in the 1940's in Australia just after the war. Also the main location which is the  lighthouse has a magical quality as a place 'away from the things of man' and away from reality. This is the premise of this wonderful book. The lighthouse is a safe haven for Tom the new lighthouse keeper and his young wife Isabel as he wants to escape the memories of the war and start afresh. Life is idyllic until after 3 miscarriages and inconsolable Isobel finds a baby washed up in a little boat with a dead man and persuades Tom much against his instincts to keep it.
Like Tom and Isobel the reader assumes the baby's family is dead are they?

The plot really starts to thicken and the different shades of right and wrong rear their head on several occasions. As new truths emerge Tom struggles with his conscious about who the baby belongs with. His loving wife and brilliant mother or the young woman who believes she has lost both her husband and baby.
The dilemma for Tom, especially when he realises he has met the baby's mother before, is can he sacrifice this womans grief for the happiness of his wife? The moral dilemma of a situation rapidly spinning out of control is painful , heartbreaking and intriguing. I am not sure any reader would be convinced of the absolute right or wrong of any of the decisions made .

Of course ultimately it is the innocent little girl. Lucy Grace who will be the unwitting victim and potentially emotionally scarred.

A gripping read that will have the rights and wrongs of the situation swirling around your head long after you finish the book. A great first book and look forward to the film as it definitely has a cinematic quality.

Ps. Good For a Book Group, loads to discuss