Blog Tour for Night of the Party by Tracey Mathias 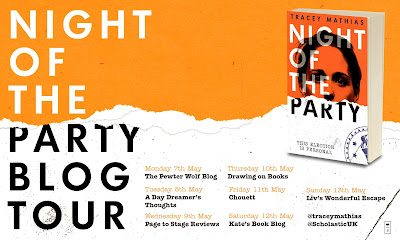 NIGHT OF THE PARTY

NIGHT OF THE PARTY is a political thriller and love story for teens, set in a dystopian, near-future England that’s governed by a hard right, ultra nationalist party.

Was there any particular incident during the build up to or during Brexit that inspired the politics in Night of the Party?


There wasn't a single specific incident; it was more a matter of picking up on general political trends at the time when I was developing the characters and plot of the novel, in late 2014 and early 2015. This was in the run up to the General Election of 2015 when UKIP was becoming increasingly vocal, picking up support in the polls, and even winning a couple of Parliamentary seats as the result of defections from the Eurosceptic wing of the Tory party. The Party in the book really resulted from imagining the most extreme version of that kind of nationalist, anti-immigration agenda that I could. The dystopian politics of the novel were fully formed, and most of the details worked out, before I'd even heard the word Brexit, and long before the EU referendum. What's been eerie has been to see how aspects of that world have been mirrored in real life in the last couple of years; most recently, of course, with the Windrush scandal.
What's your favourite part of Night of the Party?


I like the Sophie scenes, in both Ash and Zara's memories. Partly because they reach back to a happier time that's less shadowed by both grief and danger, partly because Sophie is probably my favourite character in the book. And the sense of light and lightness in those scenes also made them enjoyable to write.  Which character do you most identify with?


Ash (though I can't do maths or run to save my life). But I was rather like him as a teenager: academically ambitious, rather serious, very focussed on getting to Uni, a bit too well behaved. And we share a defining experience, although the details are very different: I had also lost a sister, and was my parents' only surviving child.

Do you hope to inspire teens to become more engaged in politics?


It's obviously a key theme of the book that politics has concrete effects on individual lives. So I would certainly hope that readers would be prompted to think about how politics affects them and others. In particular the novel raises issues surrounding people's rights to move across borders, and the status and treatment of people who find themselves (for whatever reason) living somewhere other than where they were born – questions which have a sharp and immediate relevance now in the wake of political developments that I didn't predict when I started to write: the hostile environment, the Windrush scandal, and the impact of Brexit on the status of EU citizens in the UK.


Why did you want to become a writer and has anything surprised you about being a professional writer that you didn't expect?


As a child I was a bookworm and a daydreamer; I scribbled stories, and typed them on my Dad's heavy typewriter (on pink paper, for some reason that I can't now remember). Throughout my childhood, I dreamed of being a writer when I grew up, then I stopped writing when I started doing English A level, cowed by the brilliance of what I was reading. But the ambition to write never entirely went away, and when my youngest daughter started school I happened to come up with an idea for a story for children – which became my first fantasy novel. I suppose one thing that's surprised me about being a professional writer is how full of ups and downs the journey has been. That first novel was published in Germany in 2009 but it's taken many setbacks and another nine years to get to my UK debut.
What is a typical writing day for you?


I'm not sure there is such a thing...! But I'm definitely better in the mornings than the afternoons; if I don't get some work done before midday the day is likely to be a write off (sorry, I didn't intend that pun but I'm letting it stand.). Sometimes I work at home: early, at my desk, later, on the sofa; sometimes at the kitchen table, sometimes in the garden. But I also sometimes meet up with other writers and work alongside them for solidarity and company.
Are you working on your next book and if so can we have a sneaky clue what it's about?


It's at a VERY early stage: I have a couple of characters and a setting in my head, and a very loose sketch of the plot, and that's about all! It will have some things in common with Night of the Party: it will be set in a world that resembles but isn't quite real life, and will look at how individual lives are changed by the bigger context in which they exist.
Who is your favourite literary hero or heroine?


Too many to choose from! But reading Middlemarch for the first time at eighteen was one of the great moments of my life and I still feel a strong affinity with Dorothea Brooke (also too serious and well behaved).

Which is your favourite bookshop?


My all-time favourite bookshop has gone now. It was an indie at the top of the street where I live. The interior was long and narrow, and they'd added a gallery half way up the wall to increase the shelf space. It was a shop run for and by book lovers; on at least one occasion I went in to find the assistants reading out loud to one another from their latest favourite book. It was driven out of business when one of the chains opened in the local shopping centre. Nothing has quite replaced that for me, though I do enjoy the London Review of Books shop in Bloomsbury. It has such a comprehensive range of books that it always makes me feel totally under-read, but the café has brilliant cakes which help to compensate for the sense of literary inadequacy...


Again, too many to choose from. But I do love the lines from Little Gidding that I used in Night of the Party:


We shall not cease from exploration


And the end of all our exploring


Will be to arrive where we first started.

Thank you to Tracey and Scholastic for inviting me to be part of the blog tour. You can follow them on #NightoftheParty #StopTheParty @traceymathias @scholasticuk

About : Tracey Matthias is writer-in-residence at the DaCapo Music Foundation. She previously taught at a sixth form college and worked for the British Council on international development projects. Political thriller,