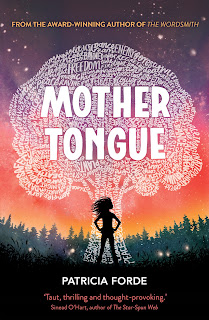 After global warming came the Melting. Then came Ark.

The new dictator of Ark wants to silence speech for ever. But Letta is the wordsmith, tasked with keeping words alive. Out in the woods, she and the rebels secretly teach children language, music and art.
Now there are rumours that babies are going missing. When Letta makes a horrifying discovery, she has to find a way to save the children of Ark – even if it is at the cost of her own life.
Mother Tongue is the new speculative middle-grade climate fiction from the award-winning author of The Wordsmith, winner of a White Raven award and a Library Association of America Notable Book.


A fascinating insight into World Building with author Patricia Forde.

In writing terms, world building is the process of inventing an imaginary world. I had my first experience of inventing a new world when I was about seven. My five sisters and I took turns at washing the dishes after dinner each night. My job was to dry the cutlery and replace it in the cutlery drawer. Over time, I found ways to amuse myself as I worked. I imagined that I was dealing with families: the Knife family, the Fork family and the Spoon family. Teaspoons were neutral. They were babies and could go into any family. Soon I was playing elaborate games of make believe with the cutlery. I made houses for them and had had them visit one another. I decided that the Forks were cantankerous and that the children in the other families were afraid of them. Without ever knowing that such a skill existed I had started to world build.
Later, I used the same technique with a pack of cards. Now the families were the Hearts, Diamonds, Spades and Clubs. And the children had ages! The ten of clubs could play with the ten of hearts but they ran away when the young three of spades tried to join in. The mammies would get together to do the shopping while the dads went out to work. (Odd, given my own mother worked!) As I got older, the stories became more elaborate, rules were made, punishments invented for those who broke the rules and in my head these imaginary worlds streamed past all borders until even I couldn’t see where they ended.
Inventing Ark, the land ruled by John Noa after the climate-change catastophe known as the Melting, whilst writing The Wordsmith and later Mother Tongue was the most enjoyable part of the work for me. I gave Ark a history. I did a timeline from our time to where the story starts. I had to know, for example, what age Noa was when the final catastrophes happened, in order to make the timeline believable. I had to imagine what the end had looked like, the panic as people fled from the rising water. I had to think about the geography of Ark. I drew maps showing key places to keep me grounded as I wrote. I thought about religion. There is a statue of The Goddess in Ark. We discover that she was actually a prophet sent to warn people about human cloning. In my head there was a long and complex story about the religions of Ark, what people believed in and why. John Noa didn’t believe in an afterlife. He said that only mankind would be arrogant enough to believe that death wasn’t the end.
I love historical fiction and as the story took place after the Melting had happened it felt more like going back in time. Global warming had caused the Earth to heat up, the seas to rise and all technology had been drowned.
We were back in a time before computers, before phones, before the industrial age. In Ark you find shoemakers and tanners alongside farmers and cooks.
This dystopian future was a simpler place in many ways but also has some new ideas. There is, for example, Central Kitchen. People are not allowed to cook for themselves. It’s less wasteful, and more energy efficient, to have all the cooking done in one location. People eat what is in season and they eat what they are given or they starve. No citizen of Ark gets to choose what they eat. That too is done centrally. I found that idea quite abhorrent. I love food and I love to cook. I believe it’s a basic human right to be allowed to cook your own food.
In Mother Tongue we move out into the forest that surrounds Ark with its rebel camps, wild animals and strange atmosphere. This was a different type of world building. Here I had to think about the life of an outlaw. What it’s like to live on the edge of a society. I drew a map of the forest and studied different flora and fauna, though much of the research didn’t make it into the book.
And then there is the question of language. In any fantastical world you need to interrogate language. Is there more than one language, more than one dialect? In Ark, there are people who are fluent, people who are wordless, and in between there are those who survive on just five hundred words. Even within that last subset, there are people who speak beautifully, like Mrs Truckle, and many who sound ‘rusty’ to Letta’s well-tuned ear.
History, geography, religion, class, money, language and power. All of these things are elements of world building. They say you should never see how a sausage is made or how a law is made. I think they could add world building to the list. Whereas the writer needs to know a lot about a newly invented world, the reader doesn't need a massive amount of detail. They don’t need to be deluged with information and back story. Readers can hugely enjoy the experience of the world (think of The Hobbit or The Borrowers) but really they want to have an emotional reaction to the story. This reaction comes primarily from the reader’s relationship with the characters.
When it comes to constructing a world, I think the reader needs vivid details, suggestions and well-placed clues. They do the rest of the work for themselves.
World building can be a stressful occupation for a writer and it is fraught with difficulties but when I am about to imagine a new world I like to think of what Bilbo Baggins once said:
“It’s a dangerous business, Frodo, going out of your door. You step into the Road, and if you don’t keep your feet, there is no knowing where you might be swept off to.” –Bilbo Baggins

Patricia Forde is from Galway, on the west coast of Ireland. Her first novel The Wordsmith was published to great critical acclaim in 2015. It has since been published in the United States, Australia, Denmark, Russia, Turkey and the Netherlands. It has won a White Raven Award from the International Youth Library, is an American Library Association Notable Book for Children in the United States, and was shortlisted for the Children’s Book of the Year Award in Ireland. In 2018 Patricia wrote Bumpfizzle the Best on Planet Earth, which was chosen as the Dublin UNESCO Citywide Read 2019. 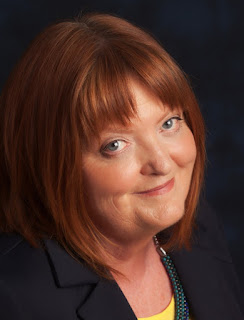 MY BOOK REVIEW FOR MOTHER TONGUE BY PATRICIA FORDE
CHILDREN 10+
After global warming, the new order wants to silence speech forever. Letta is a wordsmith and rebel, teaching children language, music and art. But when babies start to go missing, she must find a way to save them. This taut dystopian thriller has a strong environmental message at its heart. It also questions the balance between political power and corruption. This vivid world and courageous heroine will enthral readers and is ideal for book clubs.
PB Little Island £7.99
5/5 Stars 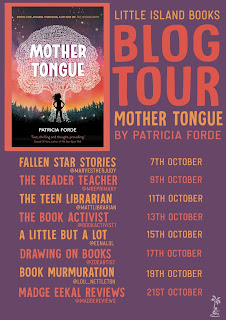