Synopsis
Disgraced former Presidential guard Mike Banning finds himself trapped inside the White House in the wake of a terrorist attack; using his inside knowledge, Banning works with national security to rescue the President from his kidnappers.

Musings.
Not a lot to say about this below mediocre action flick. BIG disappointment. Not impressed with Gerald Butler as an action hero. He's very nice but dull and the script is dreadful. Aaron Eckhart has no real gravitas as the president and what on earth was Morgan Freeman doing in this? He did do his best but the director should be given a kick up the ....... Best thing in the film was the baddy Rick Yune, last seen as the baddy from Bond film Die Another Day. He has real presence and the fight scene at the end was only any good because of him.
OK will stop going on but if you want to see a good president action flick pass this by and head for Air Force One.

Posted by Drawing On Books at Saturday, September 28, 2013 No comments:

The Foster Husband by Pippa Wright 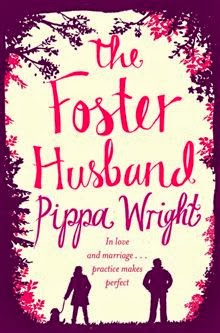 Kate left her seaside home town of Lyme Reggis for the bright lights of London when she was eighteen, and never looked back. She had it all: the glamorous career, the lovely house, the gorgeous husband.

But now she’s back: unemployed, separated, and holed up in her dead granny’s bungalow. Worse still, she’s forced to share the bungalow with Ben, the clueless and domestically challenged fiance of her bossy sister Prue.

Ben is a man in need of simple instruction. And Kate is a woman in need of a project. So she decides to secretly train Ben, her foster husband, as a selfless pre-wedding gift to her sister.

But Kate may still have a few lessons of her own to learn…
My Musings
A funny modern romance. Kate's story shifts between her past in London and present in Lyme Reggis. Kate is a girl about town, a laddette workaholic , not the usual heroine I would relate to but Pippa gives her vulnerability and likability . You relate to the fact we have all make mistakes and by trying to protect our loved ones from them can be an even bigger mistake which Kate learns the hard way. Her husband Mark whom she has left for reasons we will later find out is charming and lovable and you desperately want it to work out between them.as they lurch from one of Kate's hang ups to another. We see their love blossom and disintegrate. Fast forward to Lyme Reggis where Kate has holed up with her family and is intent on making her sisters boyfriend perfect by 'fostering ' him until he is trained properly. As you can imagine it doesnt' turn out well. her story unfolds and twists and turns until the climax and a satisfying if not open ended finally. I laughed out loud but found it more layered and with more depth than most other chick lit. I would recommend for holiday read or curl up book. I will definitely read her again.
Posted by Drawing On Books at Friday, September 27, 2013 No comments:

Synopsis
In Summer 2013, pioneering director J.J. Abrams will deliver an explosive action thriller that takes 'Star Trek Into Darkness.' When the crew of the Enterprise is called back home, they find an unstoppable force of terror from within their own organization has detonated the fleet and everything it stands for, leaving our world in a state of crisis. With a personal score to settle, Captain Kirk leads a manhunt to a war-zone world to capture a one man weapon of mass destruction. As our heroes are propelled into an epic chess game of life and death, love will be challenged, friendships will be torn apart, and sacrifices must be made for the only family Kirk has left: his crew
My Musings
Seeing Star Trek, Into Darkness for the second time and it is definitely the best Summer blockbuster film of 2013. The casting is inspired, Chris Pine as Kirk and  Zackary Quinto as Spock have great chemistry and have been given sharp repartee. Scotty and Bones are both given room to develop their characters further. (Poor Scotty must have had to train hard, he had to run through the entire movie!).  At first I wasn't sure about Benedict Cumberbach being cast as the baddy. I am a HUGE BC fan but couldn't stretch my imagination from Sherlock to the big screen. How wrong was I?
He is AWSOME. Cold, deadly and charismatic. He really kicks some arse as well. Brilliant. Also great to see Peter Weller (Robocop) in a meaty role. The plot really gets going when Kirk is decommissioned for ignoring orders but is back in the fold after BC strikes with tragic consequences. He is set on a mission find and Kill BC. The plot takes on the morality of doing this and develops the characters alongside BC constant Machiavellian twists and turns. Is he with Starship enterprise or against? Who is he exactly?
I won't spoil it if you havent' seen it yet!
Action, humour, romance. It's a very cool film and I really hope that with JJ Abrams off to do Star Wars.( Wont this clash? I can't see one person doing both but have been wrong before)
I really hope that the third instalment doesn't take too long. That would be a real tragedy.
lets hope that Abrams company does not spread himself too thin. obviously very talented but hopefully not too greedy as only the fans will lose out.
If you like this you may like
Star Wars, Stargate,
﻿
Posted by Drawing On Books at Friday, September 20, 2013 No comments: 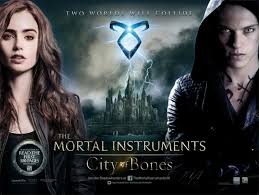 Synopsis
When her mother disappears, Clary Fray learns that she descends from a line of warriors who protect our world from demons. She joins forces with others like her and heads into a dangerous alternate New York called Downworld.

I was really looking forward to mortal Instruments, I 'd really enjoyed the book even though there are continual whispers of plagiarism. Well as far as I'm concerned all writers and artists take inspiration from something and Clare makes this world her own. I really liked the casting . It is set up nicely with Lilly Collins playing Clary when she discovers she is a Shadow Hunter and holds the secret to where the Mortal cup is hidden which everyone is searching for. The Action is fast and furious and the growing romance builds in knowing looks between Clary and Jace much to the distress of Simon her BF. The look of the film is great, totally OTT with Gothic rock looks abounding. Bowers poses well and looks like he spent longer in the hairdresser than Clary. (I wasn't complaining) However it is the directing that lets the film down ultimately. It's a little fragmented which is not surprising as these are BIG books to put on to screen. The story isn't told clearly enough of the different worlds. The action as i said is goood but can border on the childish.

The WORST part though is the werewolves. Such great characters int he books but OMG. I though the ones in Twilight were bad but these make Michael J Fox in Teen Wolf look up to date. The actors also acted like they new it was embarrassing. I am not sure if the director could decide to go for the Harry Potter children's audience or Twilight teen audience so it was a bit of a mish mash.  I feel it could have been al ot darker but don't want to lose the humour as Jace especially has some great lines thought the books.  Jonathan Rhys Meyers makes a great baddie, altho a little young for the book character. I did feel he wasn't used enough, just popped up at the end for a great fight scene and also I feel he was slumming it a teenie bit and hopefully if they do the next film he will believe in himself a bit more.  Also looking forward to seeing more of Magnus Bane , great looking actor but may need acting lessons before next one. (nothing that can't be fixed:))

Disappointed also in the recreation of the kissing scene on Clary's birthday in the flower garden. I loved that part of the book but they made it look like a Disney movie when it should have been breathtakingly romantic.

All in all i understand why it didn't set the box office alight as it tryied to be all things to all people. However i really hope it does well enough that they will do another. They should start filming this month so the signs are good.  But they should build on the darker edgier element and leave the silly childish monsters alone. Make the editing tighter and more caustic humour would be great. There are some interesting relationship to build on and This is pure escapism and if this genre has past it's peak i really think there is still room for this series. I am on the 3 rd book and the plots and twists are great. Can't wait!