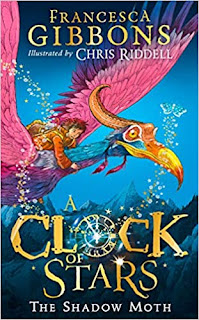 A CLOCK OF STARS

.A magical mix of modernity colliding with myth. Imogen and Marie, two bickering sisters, find themselves trapped in a magical world they discover behind a secret door in a tree.
.
They must help a spoilt prince escape monsters and find a missing jewel to save his country before they are able to return to their own world.
Children will adore this thrilling fantasy quest with its burgeoning friendships, automatons, magic and hidden enemies.
.
The short chapters keep the story racing along while the plot unfurls like the wings of a moth within a world of excitement, daring and courage.  The lyrical writing is perfectly complimented by the fantastical and exquisite illustrations
I loved this magical contemporary fairy tale. It is absolutely riveting and perfect for Christmas.🥰😍🦋
.
The Secret Garden meets Narnia meets Brothers Grimm.

With all the magic of Narnia and the humour of Mary Poppins, this is a future middle grade fantasy classic – and the beginning of an unforgettable journey…

Followed by Marie, Imogen finds herself falling into a magical kingdom where the two sisters are swept up in a thrilling race against time – helped by the spoiled prince of the kingdom, a dancing bear, a very grumpy hunter… and even the stars above them.

Thrilling, sharply funny, and with characters you will fall in love with, A Clock of Stars is a timeless fantasy from an astonishing new voice.