Film Now You See Me

Synopsis
An FBI agent and an Interpol detective track a team of illusionists who pull off bank heists during their performances and reward their audiences with the money.

Musings
Was really looking forward to seeing this but a little put off by the mixed reviews. Thankfully I was very pleasantly surprised. Great starry cast with an interesting mix of characters. Very pacy, exciting and interesting, especially if your interested in magic and how they do it. (They certainly don't give it all away which I was led to believe from some reviews.) The four illusionists are put together by a mysterious benefactor to pull off bank heists. I especially liked Woody Harrelson as the mentalist and Dave Franco (James Franco's brother) as the young hustler/pickpocket. Morgan Freeman was also very sharp as their pseudo nemesis. Michael Caine was taking the money and running for all the time he was on screen!! The script was snappy and the action slick. The only weak part was the end felt a little rushed and you felt short changed. however if you want a glitzy escapism film with fast paced action and a plot that will keep you guessing until the end this is for you. 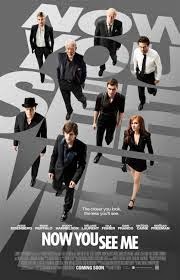