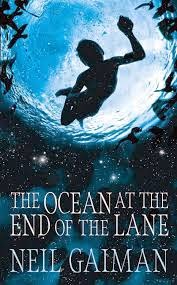 Sussex, England. A middle-aged man returns to his childhood home to attend a funeral. Although the house he lived in is long gone, he is drawn to the farm at the end of the road, where, when he was seven, he encountered a most remarkable girl, Lettie Hempstock, and her mother and grandmother. He hasn't thought of Lettie in decades, and yet as he sits by the pond (a pond that she'd claimed was an ocean) behind the ramshackle old farmhouse, the unremembered past comes flooding back. And it is a past too strange, too frightening, too dangerous to have happened to anyone, let alone a small boy.Forty years earlier, a man committed suicide in a stolen car at this farm at the end of the road. Like a fuse on a firework, his death lit a touchpaper and resonated in unimaginable ways. The darkness was unleashed, something scary and thoroughly incomprehensible to a little boy. And Lettie—magical, comforting, wise beyond her years—promised to protect him, no matter what.A groundbreaking work from a master, The Ocean at the End of the Laneis told with a rare understanding of all that makes us human, and shows the power of stories to reveal and shelter us from the darkness inside and out. It is a stirring, terrifying, and elegiac fable as delicate as a butterfly's wing and as menacing as a knife in the dark

This is my first Neil Gaiman book and it captured my imagination immediately. A man returns to his childhood haunts and therein his memories, good and bad. These little fragments about his birthday party, his kitten, his parents are really quite haunting and pull at your heart strings.  I also  love his wonderful visual imagery in the book. However the problems for me came with the fantasy element. These were random sections that I felt were alien to the rest of the story.   I kept feeling I would 'get it' later on. That there would be symbolism in these elements that would connect to his life, or they were life lessons but unfortunately nothing transpired.I also felt that the reactions of him as  a young child to devastating events where not childlike. I felt upset for the child in these situations and was frustrated that there was no emotion from his regarding key events. I was left a bemused and unsatisfied which is very unfortunate as I was really looking forward to this book. I know this was expanded from a short story and it really tells. I am a bit perplexed that so many reviewers have given this such top marks.
Posted by Drawing On Books at Thursday, July 10, 2014