Jack Ryan, as a young covert CIA analyst, uncovers a Russian plot to crash the U.S. economy with a terrorist attack.

Under the fashionable premise of taking a popular character and squeezing more life out of it with a  prequel this takes Jack Ryan, previously played by Harrison Ford back to his beginnings with the CIA

The film starts as it means to go on. Jack, played by Chris Pine, escapes a devastating helicopter crash, saves his comrades with his back broken and then learns to walk again whilst meeting his true love played by Kiera Knightley. Phew!! and that's in the first 10 mins!

Its far too frenetic and over the top to grasp Jack's heroism. With Kenneth Branagh , hot of the success of Thor I was surprised there were such amateur mistakes. It felt rushed like he wanted to get the first part of the story out of the way and onto the bigger plot.

Here Jack uncovers a Russian plot (because of course he is a financial genius) and is soon sent out to Russia where he meets megalomaniac, Kenneth Branagh. I would suggest in future Kenneth stick to either directing or acting as clearly he cannot do both.

All the cast bring weight to the film which it badly needs but the direction is so haphazard and the plot is so ridiculous it really drains the film of enjoyment. The action and tension should have been through out. The middle is fine and gets quite exciting when Jack has to break into a high security office to get secret files and save Kiera. But when the film returns to the USA for the finale it goes downhill rapidly. The action sequence at the end is shockingly bad and just tedious.

It is such a shame as I loved the old films and this had all the potential for a new franchise with a stella cast. It even has a blink and you miss it appearance from Mikhail Barishnikov! But with all the money they clearly had thrown at this they just couldn't make it work. Kenneth seemed out of his depth and has no understanding of how to film a slick action thriller. A real pity as I love films like this and on this outing I will be waiting a  long time before another comes along.  Watchable only if your a fan of any of the great cast. 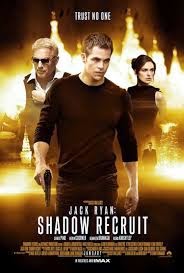 Posted by Drawing On Books at Wednesday, November 12, 2014