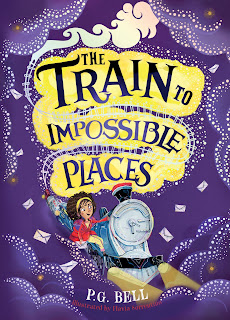 BLOG TOUR FOR THE TRAIN TO IMPOSSIBLE PLACES BY  P.G.BELL

I was thrilled to interview Peter  about his exciting new middle grade magical adventure, The Train to Impossible Places. Read about Peter's book and his life as an author below.
Can you describe your book in one sentence?
Eleven year-old Suzy's world is turned upside down by a magical mail train, which propels her on a high speed adventure to save the Union of Impossible Places from a sinister force.

How did your Welsh upbringing influence this book?
I grew up in south Wales in the 1980s, when the last of the heavy industry that had defined the area for the previous century was disappearing People were out of work, and whole communities had been left without much hope or purpose. There was a general malaise in the air much of the time.
I was keen to capture something of that in the book, which is why the troll's society has been suffering a period of "managed decline" when Suzy first encounters it. But I didn't want the reader to feel despondent, so I was careful to include some threads of hope as well - the Impossible Postal Express might be the last of its kind, but it has young and enthusiastic crew members in the form of Suzy and Wilmot, the Postmaster. And the trolls as a whole are inventive and brave. I want to leave the reader with the idea that it's going to endure, as will the rest of troll society. They're an inventive and brave species, and they're great at rebuilding when things go wrong.

Is there a train journey you would love to go on?
I'm lucky enough to have gone on some wonderful train journeys over the years, including the Shinkansen bullet train in Japan, and the Jungfrau railway in Switzerland. My dad is a rail enthusiast, so all our family holidays used to revolve around trains. But I've never ridden a transcontinental railway, and I'd really love to. The Trans-Siberian Express, or one of the coast-to-coast sleepers across the USA. That would be fantastic.

What's a typical writing day for you?
Once I've dropped the kids off at school in the morning, I sit down at my desk at home and write until midday, when I break for lunch. On a average morning I'll get about 1,500 words done. The afternoon is reserved for things like e-mails and admin, although I'll usually try and squeeze in an extra hour's writing before the kids get home again. On a really good day I'll have written 3000 words by the time I go to bed.

As a professional writer what has most surprised you that you didn't expect?
I've been very surprised by just how much extra work besides the writing is involved. There's so much admin! Payments, and taxes, and contracts, and publicity, and events, and travel, and correspondence... the list is endless. I took some advice and hired an accountant, who is worth his weight in gold. And I've employed my wife, who is wonderfully patient and practical, to handle a lot of the admin, which I'm dreadful at doing. That leaves me free to focus on the writing.

Can we have a sneaky clue what the next book will be about?
It's a sequel to The Train To Impossible Places. Suzy is determined to prove she can be a good Postie, but before she and the crew can get back out on the rails, disaster strikes. Trollville is in danger, and only they can save it!

Thank you Peter for a great interview. You can find more information about Peter and his book following handles and tags @petergbell  @Usborne  #TheTraintoImpossiblePlaces on look out for further interviews on the blog tour below. 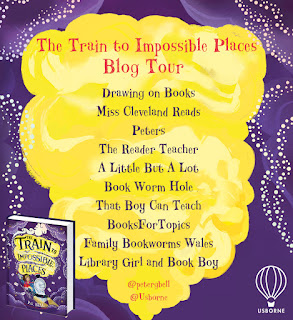 BOOK OF THE WEEK
THE TRAIN TO IMPOSSIBLE PLACES BY P.G. BELL
CHILDREN 9+
Science-loving Suzy is horrified to find a grumpy troll building a railway through her house for The Impossible Postal Express. Newly recruited Suzy will whisk children away into an enchanted world of talking packages, exploding bananas, witches and ghosts. Peppered with playful illustrations this magical adventure that turns science on its head is a helter-skelter ride providing enormous fun and the belief that anything is possible. The Wizard of Oz meets The Polar Express.
ISBN 9781474948616 HB Usborne £12.99 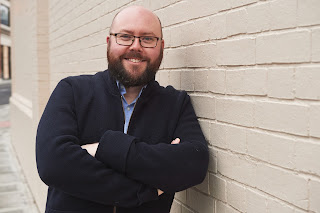