Christmas at Claridges by Karen Swan 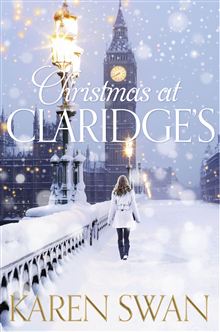 This was where her dreams drifted to if she didn’t blot her nights out with drink; this was where her thoughts settled if she didn’t fill her days with chat. She remembered this tiny, remote foreign village on a molecular level and the sight of it soaked into her like water into sand, because this was where her old life had ended and her new one had begun.’Portobello – home to the world-famous street market, Notting Hill Carnival and Clem Alderton. She’s the queen of the scene, the girl everyone wants to be or be with. But beneath the morning-after makeup, Clem is keeping a secret, and when she goes too far one reckless night she endangers everything – her home, her job and even her adored brother’s love.Portofino – a place of wild beauty and old-school glamour, and where a neglected villa has been bought by a handsome stranger. He wants Clem to restore it for him and it seems like the answer to all her problems – except that Clem has been there once before and vowed, for her own protection, never to return . . .

My Musings
Another huge romantic novel from Karen Swan with larger than life characters we would( ok me) all like to meet set in impossibly glamorous places. A truelly escapist novel to curl up with in the holidays.  I adored Christmas in Tiffanys (remains one of my favourite of this genre) and this one does not disappoint. I found Clem, the heroine , at the start unbearably annoying, spoilt and selfish, which I suppose was the point. (She does improve) I also like you were thrown a red herring in the shape of the first hero on the scene. The man with no name! I was quite partial to him though and the romantic first scenes were delicious. All the characters are endearing and there are twists galore. My only niggle, and this is on behalf of Karen Swan, is that by adding Christmas to the title it will only be stocked in bookshops in Christmas which I do understand due to the success of the Tiffany book  but being that a majority of it is set in summer in Italy it also makes it a very good summer read. Its just a thought as I would definately read this all year round!
Regardless I am sure this will be as popular as her others and definately one for the Christmas stocking.

Trivia
Follow Karen on Twitter KarenSwan1
Karen Swan began her career in fashion journalism - working at Tatler, Vogue and YOU magazines, as well as consulting to companies like Thomas Pink - before giving it all up to raise her three children and ADHD puppy, and to pursue her ambition of becoming a writer. She moved out of London in 2006 and now lives in the forest in Sussex, writing her books in a treehouse overlooking the Downs.
Posted by Drawing On Books at Sunday, August 25, 2013