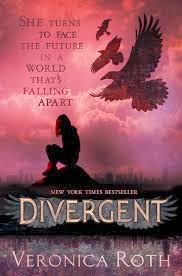 She turns to the future in a world that’s falling apart.
The No. 1 New York Times bestseller DIVERGENT – a major motion picture in 2014.

For sixteen-year-old Tris, the world changes in a heartbeat when she is forced to make a terrible choice. Turning her back on her family, Tris ventures out, alone, determined to find out where she truly belongs.

Shocked by the brutality of her new life, Tris can trust no one. And yet she is drawn to a boy who seems to both threaten and protect her. The hardest choices may yet lie ahead….

A debut novel that will leave you breathless.


Brilliant but brutal
Written in the first person the reader feels like you are really in the heroine's Tris, head struggling with her personal problems and struggles with what is right and wrong.

Set in a dystopian world divided into factions according to character, Intelligence, Bravery Selflessness etc. Tris is in Abnegation known for selflessness, living a Quaker type life style. but she is frustrated with the way of life and longs to break free.  However when she gets to pick which faction she wishes to join it will mean leaving her family behind.  First she has to take a test as do they all to decide which faction she is best suited but her test is inconclusive meaning she is DIVERGENT. this is frowned on by her world so she is advised to keep it a secret. In the end she picks Dauntless , thinking they are brave and exciting. However she is engulfed in a world of deadly rivalry and bullying. Here she meets the love interest Four, one of the team leaders whom I loved. Roth really lets their relationship build to a point it positively simmers.

The story races on with great secondary characters and piles of brilliant action and thrills. Please be warned it is not short on shock factor. Roth does not pull her punches. so be prepared.
There are ,of course , echoes of Hunger Games but it does not suffer from caparison as Roth has built her own uniquely different world and a very believable and thought provoking one at that.