When Tony Stark's world is torn apart by a formidable terrorist called the Mandarin, he starts an odyssey of rebuilding and retribution.

I enjoyed the first Iron Man but for some reason didn't fancy the second even with Mickey Rourke. However Iron Man 3 trailer seemed too good to miss so eventually saw it on DVD.

I am a self confessed Marvel Fan and I love Robert Downey Jr. The film started with Stark's house destroyed and a terrorist, The Mandarin played by Sir Ben Kingsley set to destroy the USA and the boss of evil scientist Guy Pierce. The cast is great and they really give it their all. What I really appreciated was the Gwyneth Paltrow, formally woefully underused as an Oscar winning actress. was really given a much meatier role and great action sequences which she you just knew she relished. Guy Pierce  and Ben Kinglsy both add weight as the baddies and I have to give an extra shout out to Sir Ben. I won't spoil it but at one point I was crying with laughter. He is a revelation in this.

Definitely up there with the best Marvel Films even if Iron Man is not one of my top favorites. If this is the last its gone out with a bang!

Any other Marvel film!!! 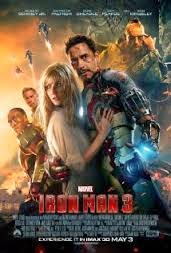