While subjected to the horrors of World War II Germany, young Liesel finds solace by stealing books and sharing them with others. In the basement of her home, a Jewish refugee is being sheltered by her adoptive parents.


Adapted from the international bestseller it tells the story of a young orphan girl Liesel, adopted in Nazi Germany. Sophie Nelisse as Liesel is mesmerizing throughout the film as she learns to escape from the tyranny of Nazi Germany through her love of books. This she unexpectedly shares not only with her adoptive parents but also with a young Jewish boy her parents hide in their basement and an wealthy woman who has lost her only son. Geoffrey Rush and Emily Watson play the parents and give quiet powerful performances where they have the confidence to underplay their characters. You warm to them immeasurably as their relationship builds with their new daughter and the tension builds with the surrounding dangers. Death is the narrator in this film always in the background whispering of an inevitability. I did not guess that the end would be quite so devastating but it is a heartrendingly beautiful film. It takes strength from its subtle performances and leaves you pondering over the uselessness and wastefulness of war. This film deserved more publicity and acclaim and will be one that stays in my memory for quite a while. 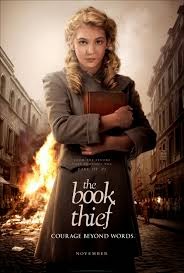