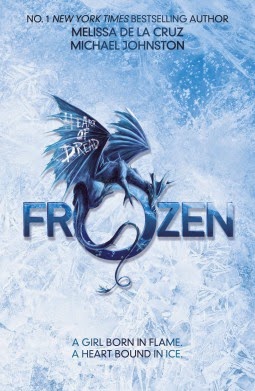 
From New York Times bestselling author Melissa de la Cruz and Michael Johnston comes this remarkable first book in a spellbinding new series about the dawn of a new kind of magic.
Welcome to New Vegas, a city once covered in bling, now blanketed in ice. Like much of the destroyed planet, the place knows only one temperature—freezing. But some things never change. The diamond in the ice desert is still a 24-hour hedonistic playground and nothing keeps the crowds away from the casino floors, never mind the rumors about sinister sorcery in its shadows.
At the heart of this city is Natasha Kestal, a young blackjack dealer looking for a way out. Like many, she's heard of a mythical land simply called “the Blue.” They say it’s a paradise, where the sun still shines and the waters are turquoise. More importantly, it’s a place where Nat won’t be persecuted, even if her darkest secret comes to light.
But passage to the Blue is treacherous, if not impossible, and her only shot is to bet on a ragtag crew of mercenaries led by a cocky runner named Ryan Wesson to take her there. Danger and deceit await on every corner, even as Nat and Wes find themselves inexorably drawn to each other. But can true love survive the lies? Fiery hearts collide in this fantastic tale of the evil men do and the awesome power within us all.

This is a hybrid book of dystopian mixed with fantasy. Mad Max meets X Men meets The Wild West!!
Sounds a mess and could have been but in the hands of these writers they pull together a vibrant and brutal world that is totally fascinating. Throw in an eclectic group of characters and this is a series which could become seriously addictive.

Nat is in Las Vegas hiding her true identity and past. She is one of the minority with special skills that are hunted and used by the brutal authority. It s a lawless and dangerous place in which she has to survive whilst fighting the monstrous voices in her head telling her to find a legendary paradise called Blue. It has water and warmth of which there is precious little where she is. The only person who can get her there is Ryan who leads a rag tag band of mercenaries and has his own secrets and tragedies.

A fantastical mix of dystopian and fantasy fiction that introduces us to some very endearing secondary characters and storylines that add depth to the bubbling romance between Nat and Ryan as they cross the treacherous toxic sea littered with icebergs of rubbish and slavers and pirates. They both fight their feelings towards one another and their journey takes you on a real roller coaster ride right up to the heart stopping finale.

This is the first book of the series and I am already addicted. Some reviewers have commented that there are holes in the world building but it didn't bother me and I just thought those things will be explained as the series goes on. If you had an indepth history of this particular world included in the book it would have damaged the pace and excitement of the story and I didn't feel it was needed.

A unique mix of genres that sets it apart and I can't wait for the next!

Michael Johnston is Melissa's husband and has been collaborating on her books from the beginning of her prolific career although his name has never appeared until now.
Below is a link to an interview with both and ineresting chat on their working life together and their thoughts on Frozen
Interview with husband and wife writing team Melissa and Michael
Posted by Drawing On Books at Sunday, August 31, 2014