UK gay and lesbian activists work to help miners during their lengthy strike of the National Union of Mineworkers in the summer of 1984.

We were lucky to be given early bird tickets for this film for a showing at 10.30 am on Sunday morning. There are not many things that will prize me away from my coffee and sunday papers but I was dying to see the film featuring a star turn from our very own local actress Menna Trussler and so off we zoomed, blurry eyed and coffeeless.
We were so glad we made the effort. Definately one of the best films this year.

Setting the stage we meet the first half of a large ensemble cast, a gay London activist group led by Mark played by the brilliant Ben Schenetzer, (recently seen in The Book Thief) and includes older couple, Andrew Scott(Sherlock's Moriarty) and Dominic West, Freddy Fox and George Mackay with Faye Marsay as the token lesbian. They all have their own personal issues to deal with but also decide to show solidarity with the Welsh miners and raise funds for them during their fight against the closure of the pits.  It would sound very far fetched if it wasn't absolutely true and because of that it is immeasurably heartwarming.

When they raise enough money the group feel they should go and give it to a community in need and after picking a welsh mining village they all head off to donate their support in person.
This is where the fun really begins, seeing two cultures clash as each side go on a journey of discovery about the other. Set against the backdrop of the fragmentation of these tight welsh communities and the emergence of AIDs and the backlash that came with it the many individual stories that are weaved throughout the film could have been a mess but was told sensitively and intelligently.

It was also nice to see no stereotyping on either side and all the ensemble cast were fantastic. The Welsh contingent was led by Billy Nighy who underplayed the quiet stern Welshman with a sensitive side and Mena Trussler innocently playing the perfect foil to the gay activists while on a steep learning curve. One of my favourite parts of the film was Mena and Imelda Staunton dancing with Dominic West. Who knew he had moves like that! Brilliant. Talking of which the music score of 80's hits are brilliant and will have you toe tapping through out.

This isn't your usual comedy as it is touched with a serious message and note of sadness in that the miners lost so much with their community and work and the gay community had to deal with aids and the hysteria and ignorance that came with it. The ending was very unhollywood in that the miners lost their fight and the gay community continue to fight ignorance on several fronts however in the film many of the individuals won on personal levels. The film ends with a really positive and extraordinary true scene showing the Union joining the 1985 Gay and Lesbian Pride Rally in London, and helped push through gay rights policies at the 1985 Labour Party Conference, in the face of opposition from that Party’s National Executive.
This film will make you laugh and cry and more importantly leave the cinema filled with PRIDE
So spread the word it's well worth it. 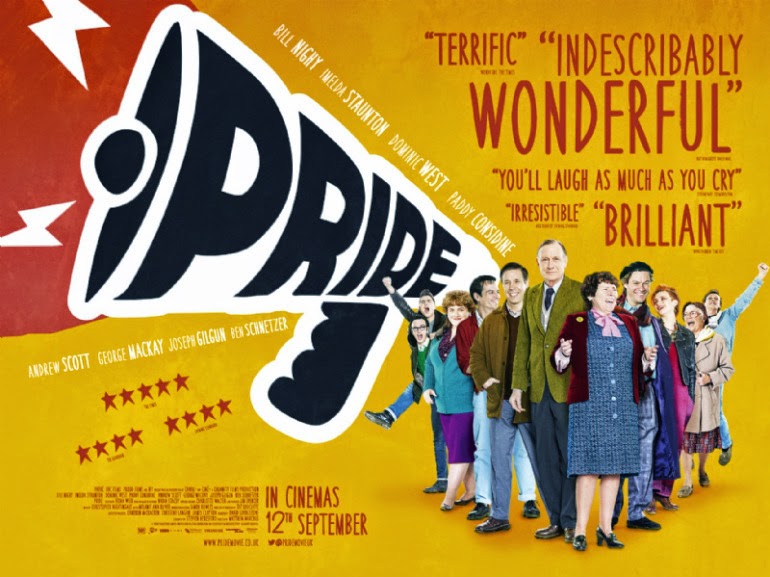