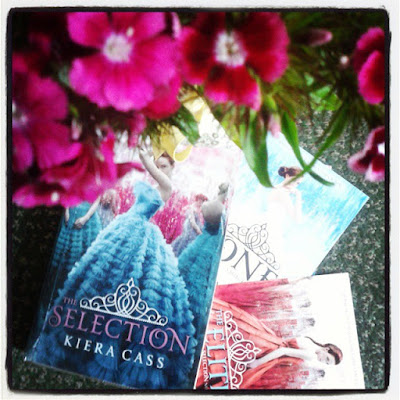 For thirty-five girls, the Selection is the chance of a lifetime. The opportunity to escape the life laid out for them since birth. To be swept up in a world of glittering gowns and priceless jewels. To live in a palace and compete for the heart of gorgeous Prince Maxon.But for America Singer, being Selected is a nightmare. It means turning her back on her secret love with Aspen, who is a caste below her. Leaving her home to enter a fierce competition for a crown she doesn't want. Living in a palace that is constantly threatened by violent rebel attacks.Then America meets Prince Maxon. Gradually, she starts to question all the plans she's made for herself—and realizes that the life she's always dreamed of may not compare to a future she never imagined.


I'm not sure where to place this novel. Its starts in a dystopian world not dissimilar to the Hunger Games with its different districts and social pecking order but then the world shrinks to the story between America (the heroine) and her first love Astor and her burgeoning friendship with Prince Maxon. This isn't a bad thing for the story but if you like indepth world building you may get a little frustrated.

This is a light fluffy romantic holiday read based loosely on Cinderella (which I got immediately )and (reading an interview) Esther from the Bible. (Will have to read up on this as not familiar).

Prince Maxim hold a 'selection' to pick a wife from chosen girls from various levels of their social order. America is a poor and struggling number 5, one up from 6 who are servants. The problem is her first love Astor is a 6 and is thereby deemed unsuitable for her so they have carried on their relationship in secret. Astor breaks up with America as he can't provide for her and persuades her to go for the 'selection'. Here the story really starts.

I have mixed emotions with America. Her behavior in some parts was so annoying and obnoxious it really raised my hackles and then she would be so lovely, feisty and endearing you forgive her and start to root for her again. I didn't like the way she kept Prince Maxim dangling and that she manipulated a secret friendship with him at the expense of the other girls. But I really loved her relationship with her maids and how she looked after them and stood up for them. The action when the enemy of the country attacks the palace adds some much needed energy and really brings out her better qualities.

Prince Maxim started off very uptight and prissy but developed nicely into the guy you really wanted to win and find true love. Astor though I feel was never truly developed as a suitor. I also didn't really like him as I felt he kept putting America into very dangerous situations for selfish reasons.

This book remains true to its pretty girly cover. Light fun romance that you will escape into for a couple of hours. If you like palaces, princes and fairytales with a little nip rather than bite this is the book for you.
And Yes I will definitely read the next one to see how the relationship develops and if America still keeps the Prince dangling or actually makes up her mind. Once I realised this was going to be a fun light read and shouldn't be taken seriously I really enjoyed it and understand why its had a lot of positive reviews and fans. It will appeal to your inner Cinderella!!