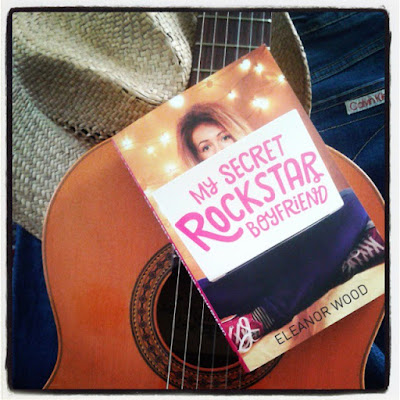 An irresistible romance is perfect for anyone who has ever had a celebrity crush (everyone).

Geeky girl meets famous boy . . . what could go wrong?
Tuesday Cooper is happy being normal -doing her a-levels and indulging in her twin obsessions: buying weird vintage clothes in charity shops and writing her beloved music blog (which nobody ever reads). Her love for music started when she was thirteen and had a massive crush on Jackson Griffith, teen rock god and SUPER HOT LOVE OF HER LIFE. Now Tuesday's eighteen and has moved on to fancying boys in real life and Jackson went off the celebrity radar years ago.
So it can't be him that's messaging her on her blog, can it?
From one girl's computer to the pyramid stage at Glastonbury Festival, this is a love story for anyone who has ever wished that someone would sing a love song just for them.
Dreams can come true . . .


This coming of age book is written in a witty conversational manner that is part diary, part blog and is very hard to put down!!.

Tuesday is a bright,  geeky self depreciating eighteen year old in the middle of her A levels. She has a lesbian best friend, a wannabe rock star boyfriend and a lovely but slightly flaky mum. She also loves vintage clothes and retro pop.

The book starts as if we have been dropped into the middle of her life while she continues to write her musings on her blog which is only read by her mum and friends. Or so she thinks.

Out of nowhere a guy calling himself Jackson Griffith, (former wild child, now reclusive, pop star) starts chatting to her as she is a fan. This throws up no end of problems. Tuesday is unsurprisingly dazzled by the attention of this gorgeous twenty something pop star and throws caution to the wind. (Wouldn't we all?) and sets out to meet him in secret. They get on so well he invites her to Glastonbury.
Should she go just before her last A level?

The reader is taken along for the ride and it is easy to see why she goes against all her good girl principles. I think we all want to be a little wild at some point in our lives!! We travel with her to Glastonbury the weekend before her last A level and meet  a colorful array of characters and discover why not everything that glitters is not necessarily gold. Having a Rock Star Boyfriend may not be all that's it cracked up to be and reality hits when after an amazing time  Tuesday needs to get back for her exam.

I won't spoil the end but Tuesday comes back from her adventure a little less naive, a little more tougher and also more sure than ever about what she want's to do with her life.

A great holiday read that will take you on a rock and roll adventure and leave you with a smile on your face.

Ps, Don't forget to read the authors note at the end for her inspiration for this story which really made me laugh. Fact is stranger than fiction it seems!!
Publisher Pan Macmillan