Book Review The Girl At Midnight by Melissa Grey 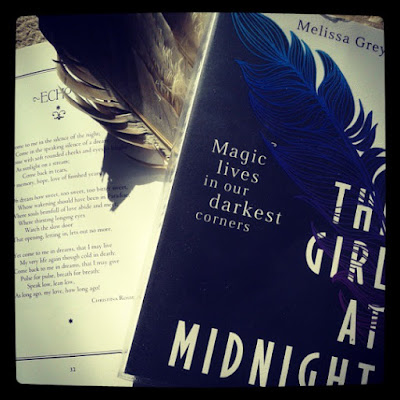 Beneath the streets of New York City live the Avicen, an ancient race of people with feathers for hair and magic running through their veins. Age-old enchantments keep them hidden from humans. All but one. Echo is a runaway pickpocket who survives by selling stolen treasures on the black market, and the Avicen are the only family she's ever known.Echo is clever and daring, and at times she can be brash, but above all else she's fiercely loyal. So when a centuries-old war crests on the borders of her home, she decides it's time to act.Legend has it that there is a way to end the conflict once and for all: find the Firebird, a mythical entity believed to possess power the likes of which the world has never seen. It will be no easy task, though if life as a thief has taught Echo anything, it's how to hunt down what she wants . . . and how to take it.But some jobs aren't as straightforward as they seem. And this one might just set the world on fire.

Echo finds a home from her abusive family with a secret world that lives under the radar of human eyes. The vivid description of these magical people with feathers for hair is very evocative and draws you into their world immediately.

Echo is a pickpocket who makes her family amongst her friends,  finds first love and is deeply loyal to Ala a magical creature who first found her. Ala entrust Echo with finding the firebird which legend has it, will end the bloody war in their world. Little hints throughout lead you to the 'big reveal' at the end which I did not guess at all.

Meanwhile we meet The Dragon Prince, Caius, their sworn enemy and his psychotic sister. When she deposes Caius he and his best friend and guard, Dorian escape and join forces on the run with Echo and her friends Jasper and Ivy. The dynamic between the  group when they all have to work together to survive  both side is sparkling .

Melisa writes really witty and likable  characters which owes a little nod to Cassandra Clare. There are some minor quibbles. Cauis and Echo relationship seemed a little rushed and convenient and the 'love ' triangle is negligible and not sure why it was needed unless there are consequences in later books. There is also part of the plot which is clearly influenced by The Daughter of Smoke and Bone. I think this could have got to the same conclusion another way around for the sake of comparison and it may irritate some other readers, especially fans of those particular books. It was Ok for me as I was enjoying the story so much, so as I said, a minor quibble!!

Melissa is a very strong, talented writer with vivid, sharp prose and a real talent for world building,  just enough to keep you hooked but not to take over the story. I really fell for the characters group dynamic. The growing relationship between Dorian and Jasper was particularly well handled  and they are two of my favorite characters.

I really loved this book  and its themes of lost love, betrayal,  finding family in friends which are set against a magical and wonderfully colourful world. I look forward to the next and especially how the characters will be developed.

If you like this you might like
The Mortal Instruments by Cassandra Clare
The Daughter of Smoke and Bone by Laini Taylor
Posted by Drawing On Books at Monday, August 03, 2015