Ethan and team take on their most impossible mission yet, eradicating the Syndicate - an International rogue organization as highly skilled as they are, committed to destroying the IMF.

Mission Impossible Rogue Nation had so many good reviews I was really dubious going to see it as when that usually  happens (Jurassic World comes to mind) I am really disappointed.

It seems though some of my faith has been restored. This one certainly gets off to a flying start (excuse the pun) with Tom Cruise clings to the side of a plane, literally. When I first saw this clip I said, CGI, but no, it was Tom giving his insurers a heart attack. Kudos to Cruise I really didn't think he could beat his stunt on the tallest building in Dubai in Ghost Protocol but he really did!

The plot is as ever convoluted. There is a rogue group of agents whom nobody believes exist except Hunt so he and his gang go rogue to prove it. Enter Ilsa Faust, played by the amazing Rebecca Ferguson, as a double agent. I wasn't a fan of hers before as found White Queen so irritating but I've done a complete turnaround. She is AMAZING!  She matches Tom in every way, with the physical fights and intellect acting as a perfect foil and in my opinion steals the show!

This is a female character that stands on her own merit. There are no 'weak' girly moments, no romance even, just standing shoulder to shoulder with Hunt as an agent of equal ability AND ITS REALLY GREAT. I really wish Hollywood would take note. There are strong female characters coming through in teen movies but for adults not so much which makes Ilsa Faust a breath of fresh air.

The action is relentless with stand out stunts, including the plane being, for me,  the underwater scene reminiscent of The Abyss and had me holding my breath and the bike chase especially exciting as Tom is clearly doing nearly all his own stunts. Peppered with the glamour of the Viennese Opera and a lot more humor (A little too much Simon Pegg for me ) it only loses pace twice for a blink of an eye. There are also a few nods  to Bond which they have borrowed from even more than ever but is certainly no worse for it.

This is more that a star vehicle for Tom Cruise as he clearly is not afraid to let others shine and comes out the stronger for it. In the fifth installment of Mission Impossible with its sharp script, complex characters and hair raising stunts, you just get that they all wanted to make a damn good action film and they really succeeded.
Best Block Buster of The Summer BY FAR! 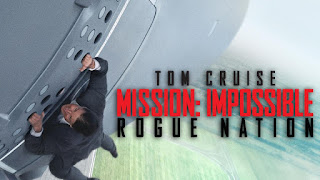