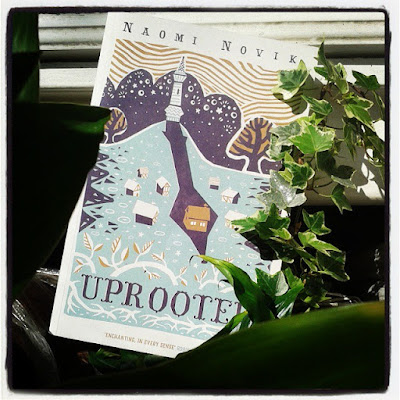 Agnieszka loves her valley home, her quiet village, the forests and the bright shining river. But the corrupted wood stands on the border, full of malevolent power, and its shadow lies over her life.
Her people rely on the cold, ambitious wizard, known only as the Dragon, to keep the wood's powers at bay. But he demands a terrible price for his help: one young woman must be handed over to serve him for ten years, a fate almost as terrible as being lost to the wood.
The next choosing is fast approaching, and Agnieszka is afraid. She knows - everyone knows - that the Dragon will take Kasia: beautiful, graceful, brave Kasia - all the things Agnieszka isn't - and her dearest friend in the world. And there is no way to save her.
But no one can predict how or why the Dragon chooses a girl. And when he comes, it is not Kasia he will take with him.

A fantasy novel drawing deeply from the fairy tales of old and ancient magic seeded in nature itself. I loved the feisty heroine Agnieszka who is certainly not a damsel in distress.A plain girl always in a delightful mess, running in the wild and best friends with the beautiful and capable Kasia I was immediately involved in her character and wanted to know where her journey led. Their local wizard, known as Dragon keeps the  evil and magical wood at bay from the villages and in return he picks a girl every ten years for, we don't know what. This time surprising everyone,  he picks Agnieszka and whisks her off to his castle

I loved the beginning of their relationship where they are both polar opposites, she is messy and unpractical while he is unsociable, clinical and clever. His calm ordered life is totally upset by her chaotic natural and wild spirit.They are totally perplexed and irritated by each other.  It is only when he finds that it is that very spirit that is able to tap into a form of natural magic that he cannot they begin to work together. I would personally have loved to see their blossoming romance given more depth and more importance in the story but for some readers they will find it a relief. I never really engaged with the Dragon as I felt he never truly left his guard down which was  a shame. Kasia however really grew in character as, being the only one without magic had to be extraordinarily brave and was therefore the true heroine of the story.

When Agnieszka saves Kasia from the evil wood it starts a chain of events neither girl could have foretold. Hearing of their rescue Prince Marek, demand they go back to the wood and rescue his mother who has been kept prisoner there for years and years. This doomed rescue sees them fight for their lives and stir up a hornets nest of trouble back in court. Machiavellian plots and untamed magic set the scene for an epic adventure of two girls plucked from obscurity to play a major part in the country's future.

I felt the first half of the book really takes you on a roller coaster ride but as the plot and descriptions get more complex it really slows the reading down and at times I felt it muddied the novel. I just wanted to see what happens next. However, saying that I really feel Novik is a true storyteller that sweeps you along to a faraway place full of strong and colorful characters. My small niggles are really down to reader preference and I know that a lot of lovers of fantasy fiction will truly love this book from a very talented writer.