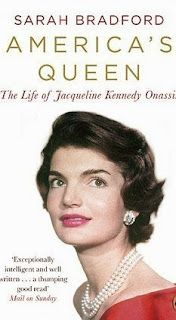 Synopsis taken from The Daily Mail


With the 50th anniversary of JFK’s assassination just days away, this revised and reissued biography is a timely reminder of the contradictory and complicated character of the First Lady. The daughter of a notorious drunk and womaniser whom she adored, Jackie was attracted to power and money and if that meant tolerating sexual infidelity, then the deal was worth it. However, she valued loyalty above all else in others, and could be ruthless with those who broke ranks. Her lasting role in American history was cemented by the images of her at JFK’s assassination and funeral, although her subsequent marriage to the physically unattractive but rich and influential Aristotle Onassis shocked many.  Bradford’s sources include Jackie’s sister, Lee Radziwill and although Jackie’s obsessive privacy leaves many doors still unopened, this is a revealing portrait.

I was really pleased to see this fascinating biography reissued. (Although I do prefer the original pink cover). For anyone interested in the Kennedy's or just in the rich and powerful this is a must.
Jackie was a product of her family, especially her womanising father, Black Jack Bouvier. She learned from him the importance of money and also how to deal with charming rogues and Alpha Males. It charts her extraordinary rise to the top of America's political royalty. How she used her attributes, her attractiveness and little girl voice to full effect while being capable of total ruthlessness and coldness. It gives us an insight into how and why a woman would put up with such a womanising husband. It also exposes why in fact she did fall for Onassis much to America's horror at the time. Bradford has written a multi layered and in depth account of Jackies' life and of those closest to her. She was a formidable woman who's love of  power and wealth and her ruthless ambition probably helped her deal with the unimaginable cruelties that littered her family's life. This is a great present and a real page turner.

Life of the Party by Christopher Ogden
This is the fascinating story of Pamela Digby Churchill Hayward Harriman , whom when I started it I knew absolutely nothing about. However a friend insisted that I read it and I wasn't disappointed. An absolute riot of a read!!
NB. from what I can see this is now out of print but if you can get your hands on it snap it up quickly!

When President Bill Clinton nominated Pamela Harriman to become U.S. ambassador to France in 1993, he was rewarding an extraordinary supporter with a crown jewel from the American political spoils system. Few deserved it more. The glamorous widow of statesman Averell Harriman had sheltered the Democratic party through a dozen years of exile and had used her late husband's fortune and her own drive to raise $12 million for the party and, ultimately, Clinton's campaign. But long before she became a diplomat, Pamela Harriman had an international reputation - as courtesan of the century. The ambitious eldest child of an English baron, Pamela was eager to flee rural life when her formal education ended at sixteen. Red-haired, voluptuous, and sexy at eighteen, when she claims to have met Adolf Hitler, she married Winston Churchill's only son at the onset of World War II and moved into No. 10 Downing Street. A volatile marriage to Randolph Churchill propelled the seductive young mother into wartime affairs with such powerful men as Harriman, Edward R. Murrow, and top generals on both sides of the Anglo-American alliance. After the war, Pamela divorced, moving to France and into liaisons with wealthy playboys Aly Khan, Gianni Agnelli, and Elie de Rothschild. Her second marriage, to Sound of Music producer Leland Hayward, put her at the crossroads of Broadway and Hollywood in the 1960s. After Hayward's death, a family feud, and a flirtation with Frank Sinatra, she married the seventy-nine-year-old Harriman. The former ambassador, New York governor, and presidential candidate introduced her to a new generation of world leaders as well as Democratic party officials delighted to welcome a beautifuland energetic doyenne. Unauthorized, but based on months of exclusive talks with Pamela Harriman, plus interviews with nearly two hundred friends, relatives, and critics, Life of the Party is the first inside look at the spectacular life and rise of a remarkable woman.
Posted by Drawing On Books at Friday, December 13, 2013