Review Confessions of a Wild Child by Jackie Collins 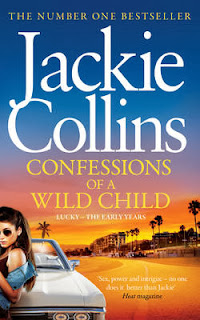 Lucky Santangelo The Prequel at last. Jackie Collins gives us the background to her popular heroine of seven books. This is Lucky’s teenage years in her own words. Neglected by her Mafia father, her mother was murdered when Lucky was five, she behaves badly to get his attention but when she hits sixteen he’s had enough! This is a glorious romp through her antics and experimentations with boys.

I have read all of Jackie Collins books featuring her most popular characters Gino and later his daughter Lucky and really loved them. They are larger than life characters who take no prisoners. Tough, ruthless yet both have a vunerability that makes them hugely appealing. So when I heard Jackie was writting a prequel about Lucky's teenage years aimed for the YA market I was very curious but excited to read it.

First it's written in the first person from Lucky and it seems Jackie has almost simplified her way of writing to appeal to her younger audience. It took me a while to get into it but I persevered as I am fan of Lucky and 'luckily' it soon picked up the pace. This is purely a holiday easy fun read but I found that there was no real direction and could have been developed more. I really felt Jackie had written this in a rush because her publisher had thought it was a good idea to get ont he YA bandwagon.

Re the YA fiction genre I am not sure if I would suggest this for a young teenager as there is a lot of sexual innuendo and exploits although Jackie does not go into full descriptions. On the other hand a strong part of the plot is that Lucky will do a lot but never go all the way with her numerous boyfriends. In other words Jackie's message to young girls is respect yourself , don't give it away. You can still have fun.

What I have always liked about Jackie is she writes about very strong inspirational heroines' that won't take crap from anyone. If that is one message she can get across than great. If she tries this market again I would urge her to take it as seriously as her other books as I felt this needed more depth.

Verdict
Could have been a lot better. Started off disappointed but it definately improved. A fun, light holiday read for Lucky and Gino Fans with an open mind!! Lots of glamour and sexual innuendo.

Posted by Drawing On Books at Thursday, December 26, 2013

Email ThisBlogThis!Share to TwitterShare to FacebookShare to Pinterest
Labels: fiction, romance, ya fiction