Katniss Everdeen and Peeta Mellark become targets of the Capitol after their victory in the 74th Hunger Games sparks a rebellion in the Districts of Panem.

I unexpectedly  loved The Hunger Games Book Series which I had put off reading for a while due to the publicity about it's violent content. I also really enjoyed the first film so I couldn't wait for the second installment, Catching Fire. I wasn't disappointed.


The tension builds agonizingly slowely from the beginning when Katniss and Peta are forced to pretend they are in love while on their winning tour  as their family and friends have been threatened by Snow. The dystopian world is brilliantly portrayed with powerful imagery of  the poor areas compared to the rich Capitol. It echoes of regimes and dictatorships past and present and makes it suitably uncomfortable viewing. You feel the repression, the frustration and the desperation of the different sectors to find any hope and that they find it in Katniss who seem to have broken rules but still be alive and well. Donald Sutherland and Phillip Seymour Hoffman  play the villains like two chess masters using the Hunger Games competitors as pawns to hang on to power.

With rebellions breaking out , in desperation they take all the winners of past Hunger Games and pit them against one another in a Hunger Games Special . Like before the competitors form alliances alongside enemies  while surviving against whatever Hoffman throws at them as The Games Master. This part is really exciting and one point ( monkeys!)  I jumped out of my chair. It's very eerily atmospheric, mainly played out in dusk but they show Katniss as a real warrior showing no mercy and her growing feelings tomards Peta. Suzanne Harris wanted to show what violence really can do, what a battle can be like and the consequences of those actions and the sacrifice that people have to make rather than glamorise it as they do in other films and books. They definately succeeded in this film which I really appreciated.

I really appreciate seeing a strong powerful and inspiring femail role model. Jennifer Lawrence must be thrilled to have such an iconic role that even today is a rarity. I also think the films success rely heavily on her commitment to the role. This does not include a spoiler but the brilliant last scene is exceptional as Jennifer lets you know exactly what Katniss is feeling without uttering a single word.

The film really tries to remain true to the book while making a gripping action film. You will leave the cinema with your adrenilin pumping!  I cannot wait to see the third film.
A MUST SEE!! 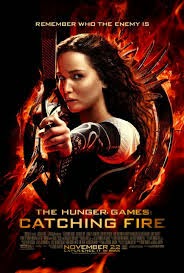 Posted by Drawing On Books at Saturday, December 07, 2013